The Story of Einstein's Dribbles That Worth 1.6 Million Dollars Now

Who would know that on a piece of hotel stationery could increase in tremendous values.

The story itself make the Einstein's dribbles from 1922 worth 1.6 million dollars 95 years later. While Einstein staying at Tokyo's Imperial Hotel, a bellboy was given this note in place of a tip as Einstien either didn't have change or the bellboy refuse to accept tips at the time. Einstein insisted to wanted to give him something nonetheless and told the boy to save it since it — they just might be valuable in the future.

It was the note in German about his theory of happiness: 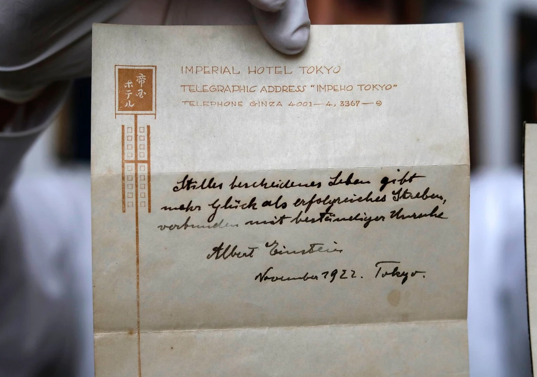 The story has been told again with a touch of our exclusive director's authentic storytelling style. Charley Stadler directed this latest commercial for the Bank of Moscow and received press attention wildly. The story came from a small agency that found the story and pitched it to the bank. Charley thought the real story is interesting but he wanted a deeper psychology behind it why Einstein wrote these notes. So he used the thought that Einstein was in a divorce settlement with his wife Mileva and in Tokyo with his new wife. The film was shot in one of the most expensive hotels in Moscow. And now went on all major ad platforms all over the world incl shot. This is his 3rd film in a row for the Bank of Moscow that went global everywhere in all ad magazines.